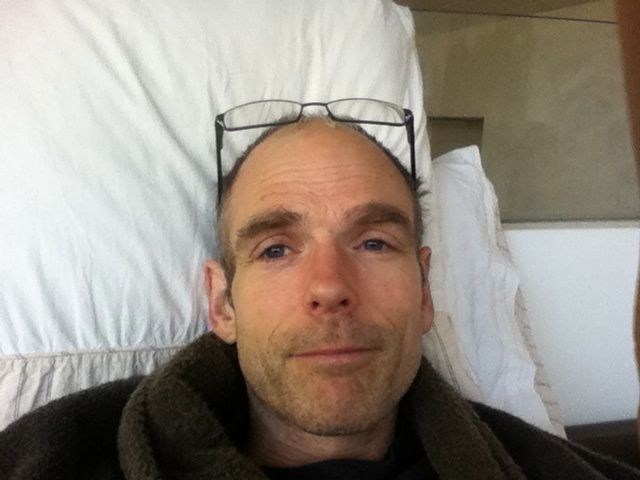 I’ve not been well for some time.

Things started to go wrong last year.  Some of those things were obvious problems and some of them are occurring to me only now as  being linked to what’s happened. For example, April last year I was pollarding the errant oak in the back gardens here, balancing a little precariously 25ft up on the crown of the tree, reaching out to saw and lop branches.  I’d done it for some years running, but last year I felt sweaty, dizzy, shaky and unsafe.  I got the job done, but I didn’t enjoy it.  And I couldn’t understand it – I don’t have a problem with heights and I knew what I was doing. Why the difficulty?

Then in May last year, my voice went hoarse.  It became difficult to talk, particularly on the phone or over background noise.  My voice was gravelly, odd, not me.  It persisted and I didn’t feel very well generally, which I put down to exhaustion and perhaps a little lowness or depression. I’d had a tough year in 2012 for various reasons and was still coming out of it.

I eventually went to see my GP who did some blood tests – nothing unusual to report though.  And he also booked me an appointment with an ENT surgeon at Treliske Hospital.  Dr G checked me over, feeling my neck carefully and putting a fine endoscope down my throat to have a look at my vocal cords.  She took a swab for analysis. Nothing showed up – no virus no infection.

She decided that I should come in for a further examination. Rigid Oesophagoscopy – Pharyngoscopy and Laryngoscopy.  So on July 5th 2013 I had a general anaesthetic and Dr G had a good rummage around my throat and trachea.

Nothing was found “Just to clarify follwing your recent admission for examination of your throat, upper gullet and voice box, no abnormality was detected that required sampling.”.  Conversationally Dr G suggested maybe I’d had a virus attack but there was not show of it now, and that perhaps my body was still overacting to that problem, thus the speech difficulties.  I was referred to the Speech Therapy department (which I didn’t do) and prescribed three weeks SILENCE! I did that more or less, communicating with people with a note book, and trying not to speak. The voice rest helped and although it remained gravelly I just got on with all my various projects.

Summer moved into Autumn.  I was busy and happy enough, but often very tired. I was working on my old bus and doing lots of sailing, and in my mind gearing up for the next round of building works at the studio with a plan in the back of my mind to get the place ready to rent out next summer for holiday-lets, make a bit of cash and live in the bus for a couple of months… 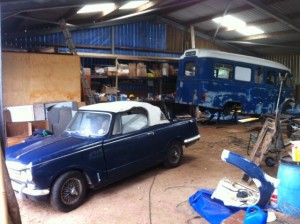 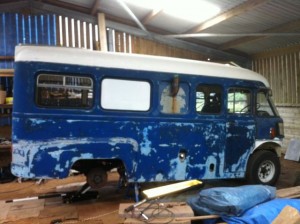 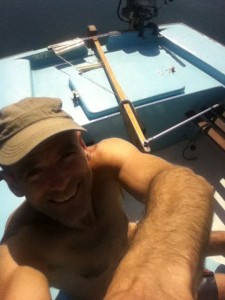 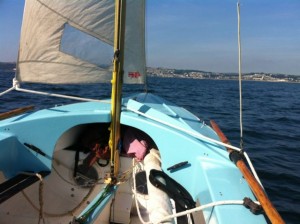 As winter moves in I start to get on with the building works and all moves along ok, but in November I start to get very heavy night sweats, drenching my pyjamas and sheets sometimes, and I break out into an eczema type rash on my legs, arms and spots on my torso.  I’d had an eczema episode before, 20 years ago when I made some sculptures using industrial quantities of soap… 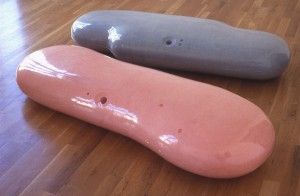 I’d got over that pretty quickly then, and I assumed that this case of eczema would disappear too.  I’d had a summer of working with fibreglass and paint so assumed that I’d again poisoned my self somewhat, despite the filter masks etc. Anyway, this eczema didn’t go away.  I ignored it as best as possible, but by December it was quite bad.

I still didn’t go to see my GP though.  It took until January to see him.  By that time the eczema was ugly, and I’d had a strange episode at Christmas where halfway through Christmas dinner I had to lie down, exhausted and with very bad back pain.  No one could understand what was happening, and I was embarrassed by it. I put it down to exhaustion again.

Finally in January I went to see my GP initially discussing the eczema, and then at a second meeting elaborating on the other things that were going wrong with me; my digestive problems, the sweats, the back pain etc.  He ordered some more blood tests,  and these showed I was becoming slightly anaemic.

This triggered some more investigations – a gastroendoscopy (like that horrid scene in Alien!) and a CT scan.  All this takes weeks, and I just get on with the building works  and some mechanical refitting works on the bus.

So today I have a meeting at Treliske Hospital Truro with Dr Anyanwy of the ENT team to talk about the test results they’ve recieved now. He’s very nice and he gently led discussion of the previous investigations (gastroendoscopy and CT scan) to the conclusion that they were now investigating the possibility of Lymphoma. This is the first mention of possible cancer. I hadn’t gone there myself yet in my mind, but it didn’t come as a complete shock of course.  The endoscopy and scans move you towards this even if you refuse to think about it. I think I remained calm, but had to ask him to elaborate – its a cancer of the blood.

I think I pretended to know more about it than I did.  I didn’t ask many questions, didn’t ask if it was treatable or what the likelihood of me having it was. I needed to be left with it for a while really.

He also explained that they were following this line of enquiry because nothing significant had shown up in the gastroendoscopy, but there were enlarged lymph nodes in my neck, and that, coupled with the anaemia indicated by my blood tests were pushing them in that direction.

As outlined above, I was exhibiting other symptoms too that had brought me to see my GP in January:

– Back pain – occasionally excruciating but with no apparent physical cause

I can’t remember now if we discussed these further.  Dr Anyanwy explained that they would book me in for a biopsy operation on my neck, to remove a lymph gland for analysis.

I left the meeting feeling calm.  Being assessed for cancer is not the same as being diagnosed.  It could still be something else…

Alison has taken me up to Treliske and is there for me to talk to afterwards. Its good to have some company. We head back to Penzance and home, light the woodburner, make some supper.  I don’t want to look up Lymphoma on the internet, fearing an abyss of information.  Instead, like a fool, I get out the old Britannia Encyclopedia: 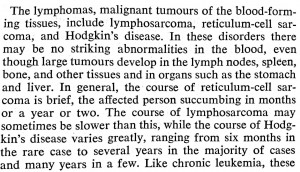 Well, the last sentence freaks me out completely of course! I’m too wigged out to read any more or go on-line and have a very bad night of it, calculating I’m probably half way through my two years and and and…