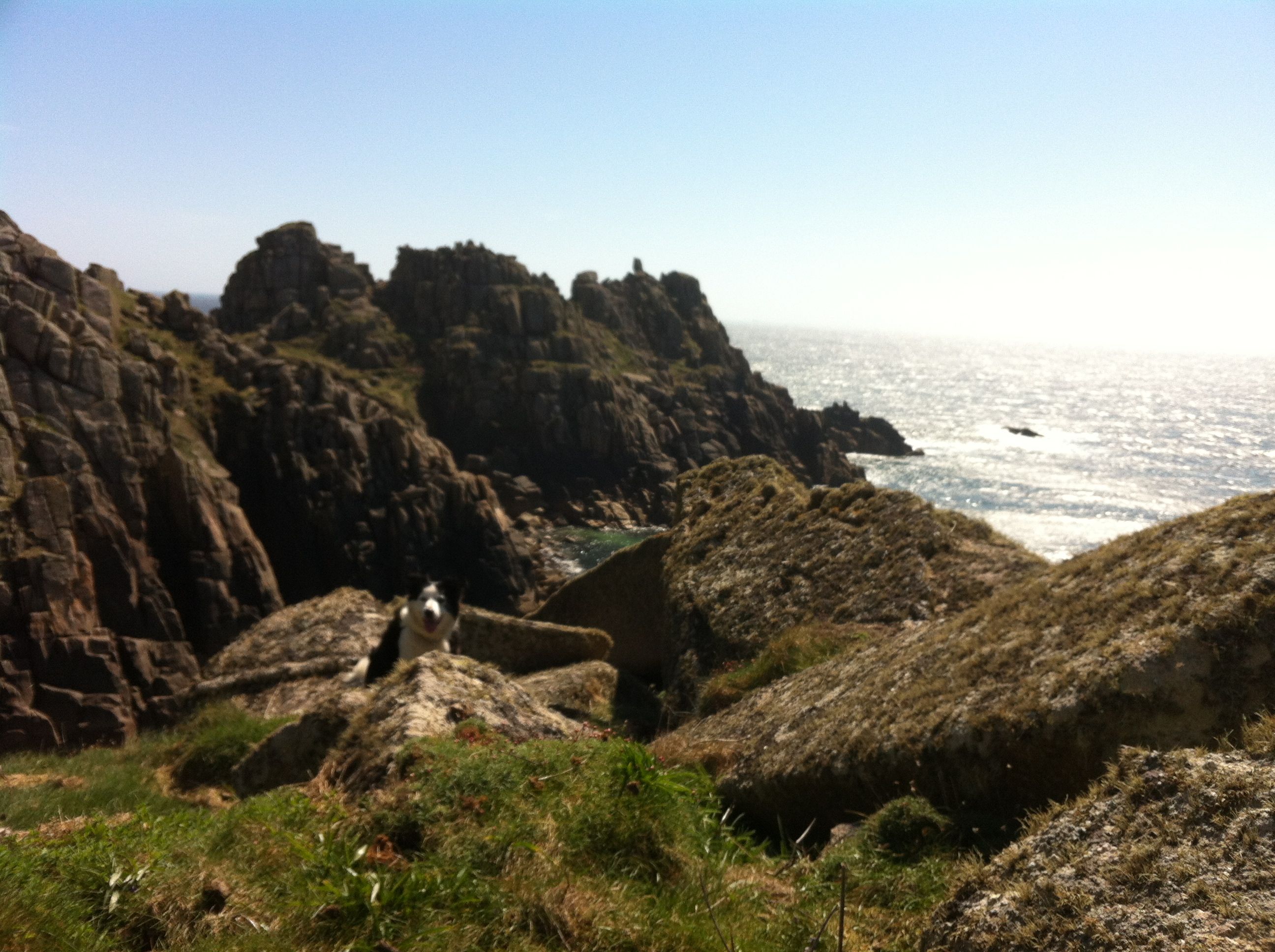 It’s been over a week since I wrote last wrote to the Lymphoma diary. Things have been going okay.

I had a great couple of days straight after being in hospital as David came to stay from London and helped set up my computer, iPad and phone so that they all speak to each other. Fantastic work thank you David, and really great to catch up.

I felt pretty knocked out by the operation and being hospital I guess. It took a while to get back into the swing of things. The sun shone all last week which made things pretty nice.

On Tuesday I went with Alison and Milly to the cliffs at Logans Rock for a lovely picnic in and fell asleep in the sun. I also bought some furniture and a rug at the David Lay auction to try and make my bedroom more comfortable, and picked up a fantastic map of West Cornwall from about hundred years ago with very dramatic rendering!

On Wednesday I went with Jane to Falmouth to play some music with Paul and Alex to welcome in the Tres hombres sale trade ship. Polly had organised for us to play on the quay as the as the ship came in and the crew unloaded the first barrels of rum they bought back from South America and the Caribbean. A good day altogether but got rather tired towards the evening while having supper with Jules and Guy. It was very good to get out of Penzance I must say, and I really like Falmouth with all the boats…

From Thursday through to Sunday yesterday I’ve been just quietly getting on with building works. It’s the Easter bank holiday in Penzance is jumping full of people, full of holidaymakers. I finished the snagging works in the bathroom and bedroom is all looking pretty good. Today I have to do the final wiring up the bathroom.

What else? Jane McL came over and we had lunch together in the sunshine in the garden. It was very good to catch up, we haven’t seen each other for some months. She has a lot of very good ideas about nutrition and health and how to deal with the health service, having been unwell herself over the years. We met up again yesterday and Saturday, and went to have lunch at the Cafe Dog and Rabbit. Of course Jane and Alison already knew each other and Penwith being Penwith, and of course there was instant rapport with Poppy and Milli. Dogs are wonderful aren’t they.

Nick and Teresa came to visit at the end of the day yesterday. We drove over to Marazion, tried to get into the revamped Godolphin Arms, but in the end had tea in a nearby cafe. We talked cancer treatment and so on, but also discussed Penzance and the Seafront Forum website. It was good to see them. I explained that Keith Bell was looking into maybe finding funding for the Forum website, which could be good in taking terms of taking it off my hands. But thinking about it, it seems important for that site to retain a degree of independence from the Town Council neighbourhood plan project. I need to have a chat with Keith.

Last night I watched a film about Steve Jobs the founder of Apple computers. It was a good film, and a harrowing story really. Jobs made so many difficult decisions, and appeared so single-minded and driven and ruthless. It wasn’t just battles in the boardroom but the battles with friends and family before that seemed so hard. He died in 2011. I wonder if he knew he had achieved his dream. I’m holding an apple iPad mini in my hand, it’s a wonderful thing. For instance, rather than typing the text for this diary note, I’m dictating it, just speaking at the screen. The Voice recognition is really good. The software even recognises place names, obscure ones like Penwith. How does it do this? Anyway, the ease of connectivity that Apple’s technology affords me is going to make my life through treatment very much easier.

Today is bank holiday Monday. Easter Monday. For me it’s just another day, and I’ll spend the morning finishing these electrics. Planning to have lunch with Alison and Mandy, it’s Mandy’s 50th birthday tomorrow but she’s working at Jam, her record shop in Falmouth,  so we’re celebrating today.

How am I feeling? It’s been an okay week, but I’m plagued by worries about how slow the assessment program is. Delays caused by NHS admin errors add weeks to the delay in treatment. Some days I feel okay but other days I feel absolutely whacked. I’m okay if everything goes well, but when things start to go wrong I easily despair, and sometimes just break out into a beaded sweat. Even small physical exertion is quite difficult. I’ve been speaking to Ffiona Lewis whose brother Angus is a surgeon in London, and his wife is a radiographer. I’d like to find out about the Royal Marston Hospital in London, with a view to getting a second opinion on my proposed treatment if necessary. And also to accelerate the process further tests if that’s possible. I’ll find out more about that in the next couple of days.

With the help of Marta and Jane McL, I’m looking into alkaline diets and to start with a limited range of supplements, to support my body during the chemotherapy. It’s taking time to get my head around all this. Maybe once my house is straightened out I can actually concentrate on it properly. That is at least the advantage of the delays in the treatment program.

I’ve chilled out about my concerns about not identifying the cancer last year. I had a good conversation with Saz who is also a GP, and she helped to set my mind to rest. It’s clear that Hodgkin’s lymphoma is a difficult one to spot sometimes with its varied and obscure symptoms. It’s easy to say with hindsight what should’ve been done. But I think my GP did his best, although I do still have questions about the ENT surgeon who twice came within millimetres of my cancerous lymph nodes, but failed to identify what the problem was. Although even this is unfair because, as the  senior surgeon who came to do my neck biopsy operation last month explained, i’m only the second case in 30 years that he had come across where the lymph nodes were so deep-set in the neck. Anyway, we are where we are, and I’m determined to make the best of it.

I wondered about changing my GP, there is an awkwardness here, because my GP is not just my GP but also my friend. I think this situation places a great strain on him as well as on me. He probably feels bad about not identifying the cancer earlier, and presenting not just a patient but his friend with Stage 4 Lymphoma for treatment. But last week we did have a good conversation, and I think it will be okay. From my various discussions with others, it’s clear that this period of testing and assessment is always unsettling. There are several other acquaintances in this little community who have suffered cancer over the last few years, and have only good things to say about the Oncology team at Treliske. It seems that things will get better once the treatment program begins and I’m properly involved with that department. So I just have to be patient. The patient patient.