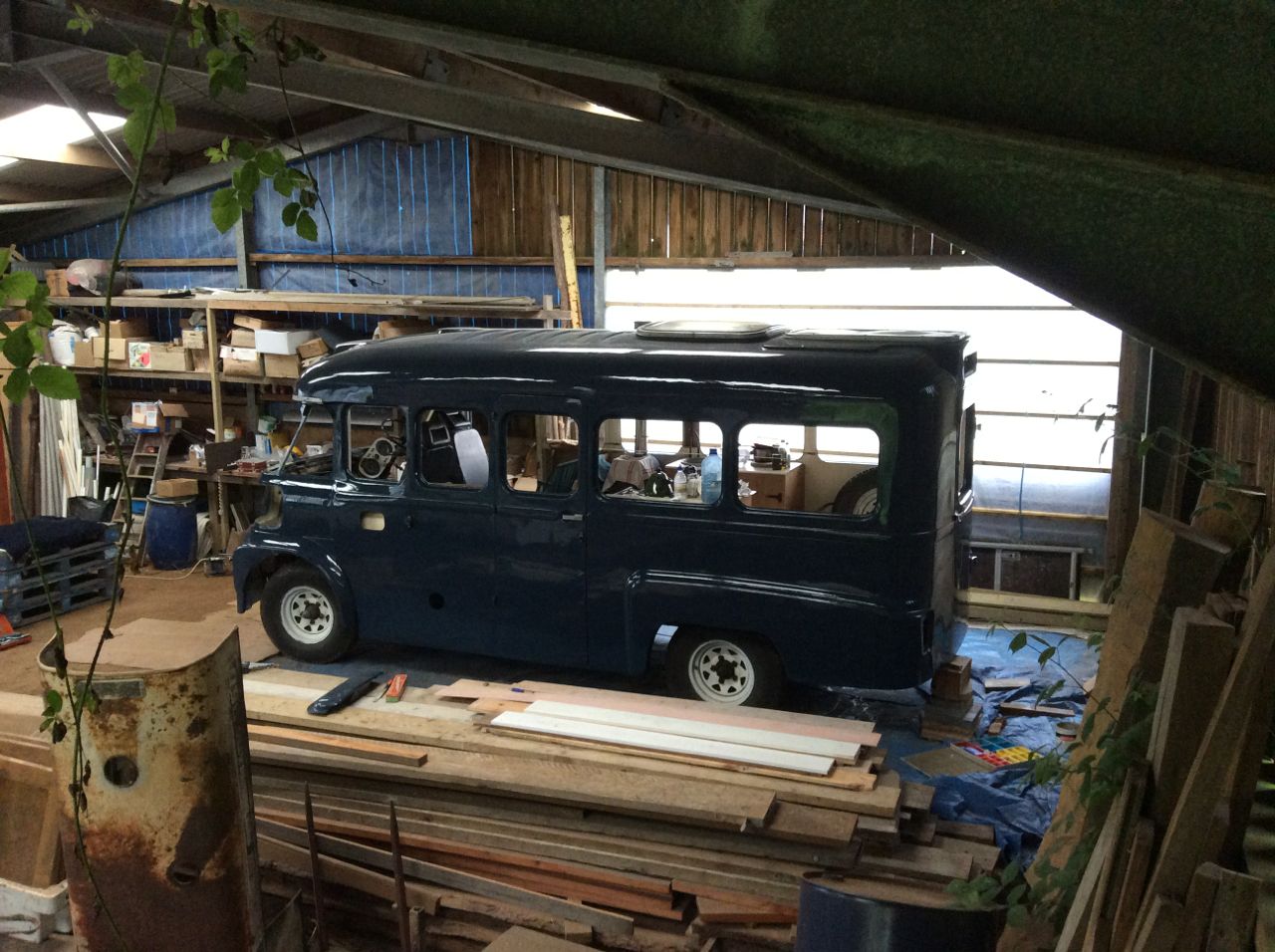 I wake up feeling fine, normal even, I just wish I could sleep a bit more but my brain kicks in and there’s nothing to do but get up. The upside is having a long early morning to read and write and make breakfast and plan the day.

I’m hiding behind the bus now I know it. I want to reply to all my recent emails from people but I’m going to leave that pleasure until Tuesday when I get the next chemo shot. It’s just that these good days are so valuable – I’m myself; clear headed and capable and relaxed, unlike the artificial ‘good days’ straight after the chemo, jumping on steroids.

So, back up to the barn and getting on, fitting the offside wing, front valence and bonnet, then the side and rear doors with their rebuilt brass ball hinges and new stainless steel screws.  It’s total bus-love I’m afraid.  It’s always been the case with this vehicle and it’s something to do with the shape and feel of it.  I’ve talked about this elsewhere, but I can feel the hands of the people who made it in every curve, see the decisions they made, follow the logic.  And I can fix it with a spanner.

There’s an idiosyncratic beauty to lots of it.  Take the door hinges for instance.  Each one is slightly different, cut to fit the curves of the bodywork, and are all of the old coach-door style with a central bolt, brass ball and spring with a lower tension nut. The brass balls take the load and allow the doors to swing, with just a little resistance from the load on the spring which makes a nice screaking noise in use.

But the genius of the design is that the ball allows the two halves of the hinge to be out of alignment as far as bodywork and door angles go, so for a bespoke design like this old ambulance body they are perfect.  And they are perfectly maintainable too – easy to strip down, simple parts to source or remake, and the brass ball self-lubricating to a degree if they’re neglected and not kept greased.   I wanted to replace all the balls because over its 45 year life span it has certainly been neglected, and some of the balls were badly worn, allowing the doors to drag.  After a long internet search I found two different old style coachbuilder suppliers who were able to provide the three different sized and shaped balls – one large, one smaller and one with a conical end to it which had confused me to start with, thinking it was a manufacturing flaw.  But no, just a different design I hadn’t come across before.

You can click on these images for a better look… 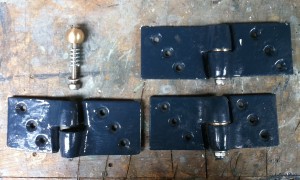 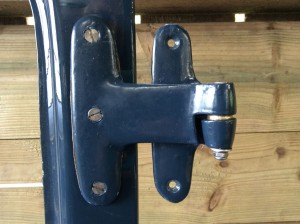 Anyway, you can imagine my nerdy pleasure when finally reassembling these today: the hinges all sand blasted, etch primed and painted, new stainless nuts and bolts, lots of grease, and greasing the threads of the fixing screws to make future removal easier and to preserve the oak framing behind the fibreglass bodywork that gives strength to the whole thing.

What me happy? I’ll say…

And I’ve been able to really eat today: rice flakes with goats milk, blackberries stirred in and strawberries on top with a little goats yoghurt for breakfast. Then two rounds of seeded wholemeal toast with a little butter and plenty of marmalade and a Yannoh coffee substitute with frothed goats milk.  Lunch a large red quinoa salad with organic goats feta cheese, beetroot, cucumber, walnuts, seeds and a flax oil mustard dressing.  Some dark 85% chocolate with almonds oatcakes and mint tea in the bus, and in the evening a repeat of last nights supper of grilled salmon short grain brown rice with more flax oil on it and a large green triple-washed salad from the garden!

I had a long and very nice chat to Chris calling from Trinidad who timed it well as I was just blissed out having fitted the doors to the bus.  And a phone call from Sarah S who caught me at the tired end of the day stretched out on the massage chair having had my back rearranged by the robot. Good to catch up!