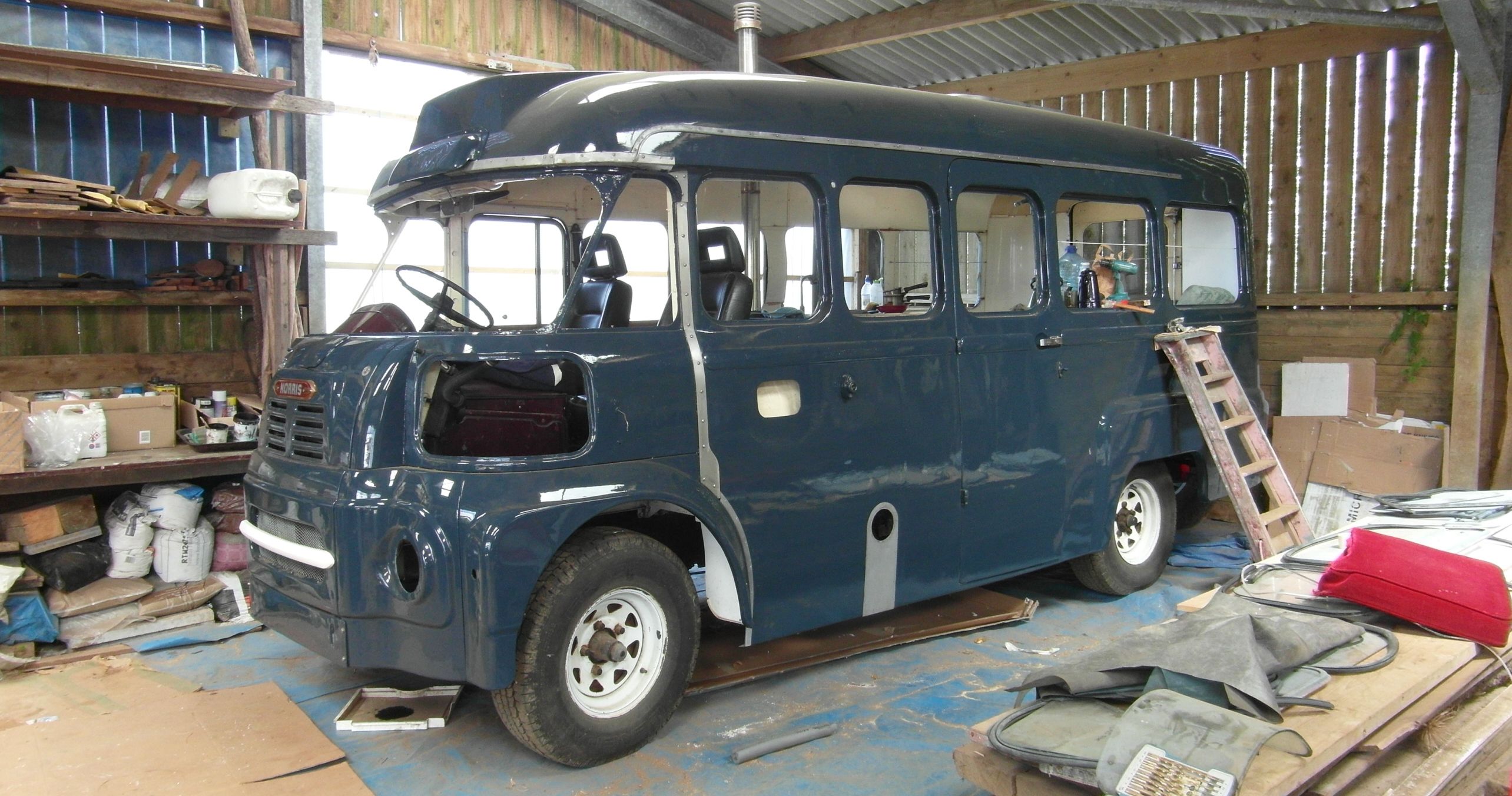 Up early to a totally blue sky day – a day for doing everything.  My immediate impulse is to go out into the bay again in Marin-Marie but I check the wind forecast and there should be a reasonable breeze this late afternoon and evening and so decide to hold out for that.

Instead I do a bit of gentle gardening – pulling up the rest of last years rocket (more soup!) and making space for some seedlings I’ve brought on and some dill that is struggling in the shadow of my potato crop.

Then up to the barn where I make a couple of refinements to my fishing hand-line reel and then get on with working on the bus again.  Fitting the aluminium gutters goes well, and then the side grill and rear numberplate which use the same rubber gasket system as all the windows so I get to try out the new fitting tool and sealant.

But by 5pm I can’t take it any more and the sea beckons.  By 5.30 I’m on the boat and getting rigged up, there’s a nice breeze, and giant Barrel jelly fish in the harbour, several feet long with great white domes maybe 50cm across.  It’s been a few years since I’ve seen these here.  They are extraordinary things – quite harmless and slow pulsing but they move at considerable speed.  I swam round one the last time they were here, and stroked its dome – it looks like jelly but was rough and tough like leather.  Pat walks past marvelling at the creatures and we have a nice chat.  She says I’m looking well and I feel it.  I realise that my energy levels are coming back up with my blood counts – I’m not so breathless and I don’t think I could have considered going for a solo sail even three weeks ago.  Things are definitely moving in the right direction.

Then out in to the bay – no other sails out, and head for St Michaels Mount.  This feels good!  The winds NNW and it’s coming on for high tide so going round the Mount is perfect and always spectacular with a little challenge as the winds fluke around it on the seaward side which flips the sails across and back for a few minutes.  The stretch of water between Marazion and the Mount is lovely, and as you come round you’re heading back into the sun.

Turning back to Penzance across the bay I heave too and set up my fishing reel.  It works pretty well!  I can let the line out and haul it back in single handed and it doesn’t get in the way much.  I can reel in the full 80m of line in about 20 seconds of fast winding before tacking – this is going to be good.  But I don’t catch any mackerel probably because the fishing weight is too light for the speeds I’m sailing at and the trace is too high in the water. 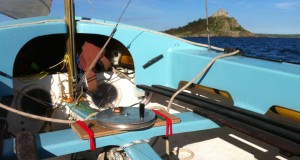 Back in the harbour after about 3 hours out and I’m stowing sails etc and Si paddles up in his canoe. He’d been out with the Canoe Club for the evening too, and had caught two fat mackerel himself and handed one over – beauties!

Finally home I’m ravenous and make a wonderful mushroom omlette with Jo’s goose egg – it looks and smells lovely but I just can’t taste a thing.  Those damn chemicals – they’re doing me good I know and its good I’m eating well.  This is so frustrating but I’m not really complaining.  Its been a great day.