Waking up in Cot Valley in the bus after about 8 hours sleep feels very good.  Green tea toast and marmalade in bed with door open the sound of the stream grey sky but thinning.  Walk down to the sea with Ali and Milli and eat fruit on the rocks.  There’s no one about.

Driving back later to Pz I’d like to just keep going.  The bus rolls along smoothly if still very noisy with the engine right there in the cab.  I must look into the lead-lined soundproofing engine blanket idea…but meanwhile just jam in the earplugs.

I spend the day at home tidying the desk and sorting paperwork.  The Ibruprofen keeps the aches in check.  I’m slowly making decisions about what to do with the Chapel Street house next door.  I rent it to my friend Delpha but she’s moving on in September and I’m not sure I want the responsibility of it any more.  It feels like time to simplify things; reduce the burden of maintenance and the business of letting, and I’d like to clear the mortgage.  The truth is I’m not a very business-like landlord in terms of maximising income, preferring to leave rents as they are for years if it keeps the renters happy and stable.  This has worked well for all, but with interest rates about to rise the equation will soon shift out of balance and it will cost me to keep that house on, or I have to start hustling more which sounds stressful.

I bought the house in 2008 because it was adjoined to the studio.  It was linked both physically and historically, in that the schoolroom (now my home and studio) was built in the garden of that house, which at the time was part of a much larger and significant Chapel Street property.  In 1805 the big house was divided into two, becoming 45 and 45A Chapel Street, and the schoolroom was built in its garden, which involved the partial demolition of a large rear extension on ground and first floor levels, some of which remained built into and over the schoolroom.  It sounds complicated and it was.  The concept of the flying freehold and all it’s associated legal and neighbour problems was probably invented in Penzance old town. 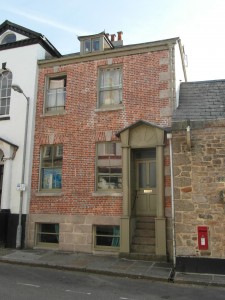 (click on image for more detail – must do something about those curtains!)

As a consequence, the three properties have been and remain intimately linked, and in the past have caused innumerable problems for all the neighbours be they mad, sad, bad or good.  Straightening out that mess has been part of what I’ve done over the years here alongside restoring the house and building my home, simplifying party-wall boundaries and removing flying freeholds where possible. Now only one remains in the attic of 45/45A.

Of course it wasn’t altruism or just a heightened sense of how neighbours could or should live together that drove this.  I bought the old schoolroom on an impulse in 1998, which since 1950 had been home to the Pooley & Rogers house-clearance auction room; a partial ruin with no drains, 2 light bulbs, a water supply from the house next door, collapsing floors and ceilings, lime render popping off the crumbling walls.  A project, a dream, a place out of London art life and it’s associated madness.

I had no idea of what lay in store in terms of problem neighbours, and this isn’t the place to go into it.  But it’s been a struggle.  This is why it is such a joy to finally have like-minded new neighbours in the house at 45 – Jo and Andrew welcome!

Once I’d bought 45A, or rather the bank bought it as I borrowed heavily on a now unobtainable self-declared income of calculated but preposterous proportions, I was able to rationalise boundaries and structures, giving the studio some outside space, a garden, and some extra rooms at first floor level, and still making a handsome and manageable town house out of 45A.  Then finally last year when old Roy moved out of 45, his children offered me the storeroom built into the walls of the studio, and we agreed a price and further straightened out the rights of ownership and access over the alleyway that runs between all three properties.

And that’s where we are. I think now the three properties and their present and future owners have a good chance to live beside each other harmoniously, or as much chance as most.  I’ve got one last bit of design & build to complete the studio, doing something with the storeroom and utility area at the back of the garage, when I’ve got the energy.

In the meantime, I’d like to simplify things.  Call it an outcome of the cancer.  I’m thinking through the possibilities and trying to conjure up a future.  I’m looking into how to sell your own house without an estatge agent, and also into AirBnB to find some short term rental income and keep the place in use while I decide what to do.