Waking up in the bus is always a joy.  In Cot Valley all you can hear is the stream and the wind or sea.  There’s no one about despite being high holiday season and the blanket cloud breaks up into one of those cloudy blue summer days.  Ali’s here and she sleeps all morning cafe-exhausted and no Milli to walk or play with.  I’m reading bits of Naomi James account of circumnavigating the globe (in Chay Blythe’s 53ft yacht) and bits of the Dye’s Wayfarer dinghy cruising book and camping in river estuaries – a sort of ridiculous contrast but which summarises my position precisely!

Mid morning we walk up to St a Just and collect provisions from the cafe then back to the bus for breakfast of bacon and eggs – the first I’ve had since December. Despite tasting only a tenth of the flavours I enjoy every mouthful.

Later I’m up at the barn and have the welder out repairing the exhaust on my motorbike and the boot-stay and hood frame of the Vitesse. My energy levels are ok but it’s careful rather than strenuous work.

Early evening I drive up to Camborne to see Steve the engineer who hones to perfection the brass crankcase bushes for my outboard Seagull engine, and we discuss boats of course.  He has a twin keeler at Mylor which he spends half the week on each summer.  I explain a little of my latest dreams about the Tradewinds, and he says he knows those boats because there’s one moored in Falmouth called ‘…something Sun’.  I know it!  It’s called ‘Midday Sun’.  And I know it because while I was waiting for my physio session last Friday at the surgery I picked a 2008 Cornwall Today magazine and on the cover, advertising the  Fal River Festival, was a photo of yes, a Tradewind 39.  I was amazed at the time and took it as a positive sign.  And that boat’s still there, a live-aboard up the Fal somewhere.  Steve said we should go and say hello, sail up there maybe next Tuesday.  Excellent! 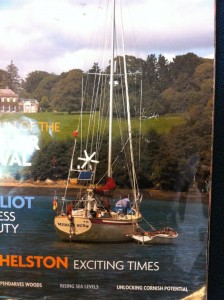