Physio at 10 for my back which is getting better and I get some more advanced exercises this time which I’m ready for.

Then it’s MOT time for the motorbike. No problems and John and the crew love the paint job! 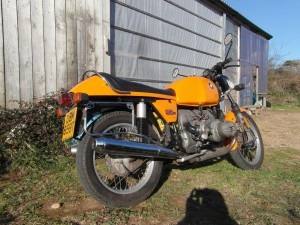 And finally time to try out the new rig on Marin-Marie.

I’m cutting it fine trying to get out  just before low tide.  I rush getting it all together and scrape out of the harbour under oars with inches to spare.  But then realise as I come to put up the sails, drifting fast out to sea in the strong breeze, that I’ve left the main sheet behind after all that faffing about with the rigging.  What to do?  I can’t sail without it, the wind’s pushing me out to sea, I’ll have to get back in.  So I get the little Seagull outboard out of the stern locker and fit and fire it up.  A relief that it works and I edge back into Penzance against the wind and head up the channel to the slip.  My normal mooring is now dry and there’s only a foot of water in the channel.  I tie up and try to run home to pick up the main sheet but I can’t run, I’m too out of breath, I can only walk and not particularly fast – my legs are all over the place.  These damn chemicals!

Anyway, I make it back just in time and cast off again, chugging out of the channel as it dries behind me – 10 more minutes and I’d be high and dry.  At last, now I’m ok.  It’s 2.30 pm.  I stow the outboard and rig the main sail, ready reefed which is good, and magically unfurl the new reefing genoa and we’re off!  Feels great!  Control of the sails at last.  The NW wind wants to take me to the Prussia Cove and beyond but fighting back against it would be a struggle so I decide to head to Lamorna and maybe Penberth along the south coast.  We’re flying along.  Happy!

After Lamorna I’m ravenous and eye up the cliffs before reaching Tater-du lighthouse, beyond which I can see that the wind is even stronger and scuffing the sea.  Offshore winds are deceptive – the water can be relatively flat and the wind chop doesn’t build up until a bit further off shore.  I’m happy to head into it with the control I’ve got over the sails now, but I need to eat and rest, so head into a little cove that is just out of the wind; deep, still water and a gentle swell.  I drop anchor and watch and wait and finally relax.  Late lunch, and doze where I sit.

A bit later I round Tater-du and battle up to Penberth and beyond to Logans Rock.  I’d love to go on; Pedny and Porthcurno just round the headland, but it’s almost 6pm and I’m aware of the long return journey and the wind seems to have shifted due north so will be beating back from Mousehole.  We’re doing well though, 5 to 6+ knots most of the way along the south coast, but have to head deep into the bay towards St Michaels Mount to then beat back to Newlyn and tacking up to Penzance, managing 4.5 knots against the wind which must be gusting force 5.  It’s exhilirating though – spray flying and I get a good soaking but Marin-Marie handles it all well and I’m back in the harbour by 8pm.

Here’s some footage – but hard to sail and film with an iphone particularly when it gets exciting so this all looks a little tame, particularly compared to Frank Dye’s Force 9 experiences!

Those with a sharp eye will notice that these clips come from two different days, but you get the idea.

We covered about 18 miles there and back. That’s halfway to the Isles of Scilly.  Next year, yes next year…