Two days before next Chemo – I’m determined to turn it around, I can’t take all this feeling down!  It’s a sunny day and I know that over in Falmouth its the Tall Ships Festival.  I don’t want to be with the crowds but decide to take the bus over there and walk the opposite bank of the Fal River with the town and harbour across the water.  I take my bycycle with me on the footpath, the pannier loaded with lunch, rain coat and binnoculars etc.

Viewed from Falmouth, this side of the river has always looked interesting with a row of boats in various states of disrepair lying on the muddy shingle under the river bank trees.  Up close its fascinating – there are some well cared for boats in amongst the wrecks.  How does this all work?  I’ll have to come back and ask those questions because I want to get on and around the headland to the Carrick Roads and Mylor Harbour to the north.

I have lunch on the beach just outside the village of Flushing, staring out over the ranks of moorings across the water.  So many vested interests here – different companies or outfits with water rights and running different areas of the river bank and water adjacent to it.  I like the apparent chaos of it all.  I talk to a few people who are handling boats along the way and slowly get a sense of it and some names and phone numbers to call later.  In the back of my mind I’m looking for a mooring for Gregory’s Girl somewhere out on this river – deep water and a swigning mooring and not too expensive, and not too long in the waiting for it either – Falmouth is rammed with boats. 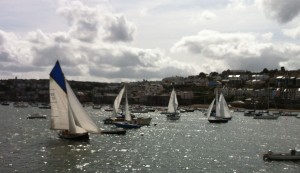 It’s a beautiful walk, and the waterways are teeming with sails – there are races going on all over the place and in the middle distance a forest of masts, spars and ropes of the Tall Ships.  I think I spot Joff’s boat Holly Mae in the binocs, and convinced its him back from France I call him up.  Yes, he’s here but that’s a different gaffer with similar grey and cream topsides.  Holly Mae is in fact hidden from view, but its good to catch up.

I walk and cycle on and end up at Mylor – pretty with boats out sailing and moored up, boats everywhere in the Roads.  My engineering friend Steve has a yacht here so I text him on the off-chance.  Yes, he’s on his way and when he arrives he and Fiona take me out on his up-together Westerly Merlin and he kindly lets me take the helm and we weave in and out of all the other craft and catch up with a huge masted monster with a Dutch flag that’s making its way up to the festival, looking magnificent.

Two hours later I’m back on dry land and contemplating how to get back to the bus.  Meanwhile I wander the pontoons of Mylor Marina checking out the yachts, looking for what it takes to make something leap out at me from the ranks of white plastic.  It’s like driving on the motorway; so many cars and they all look the same to me.  Then suddenly I see that looks interesting, purposeful and right.  What’s that then?  Of course, its another Tradewind yacht, but a 35 not the 39, and it’s a beauty. 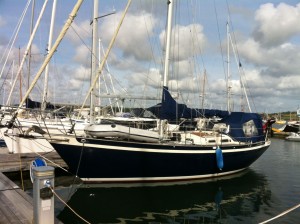 After this I cycle back to the bus in Penryn.  It’s a tall order I am so so unfit, gasping for air climbing the not so severe hills in lowest gear and having to walk up some gradients, mucus streaming from my nose and my eyes watering, lungs burning, heart racing.  Take it easy you fool.  I’ve not tried to exert myself for a long time like this, and it brings it home to me – it’s going to take a long time to recover from this process, the knocks from the cancer and the poison of the chemo.

I’d had thoughts of cycling into Falmouth for the fire works and hooking up with people, but I have to lie down for half an hour to recover from the cycle, and decide to head for home.  In fact the roads are empty and I make such good time the bus flying along that I drive on to Nanquidno and go to see Alison whose ready to pass out herself after another long Cafe Dog Day, but its good to catch up and just sleep in the bus in the field.