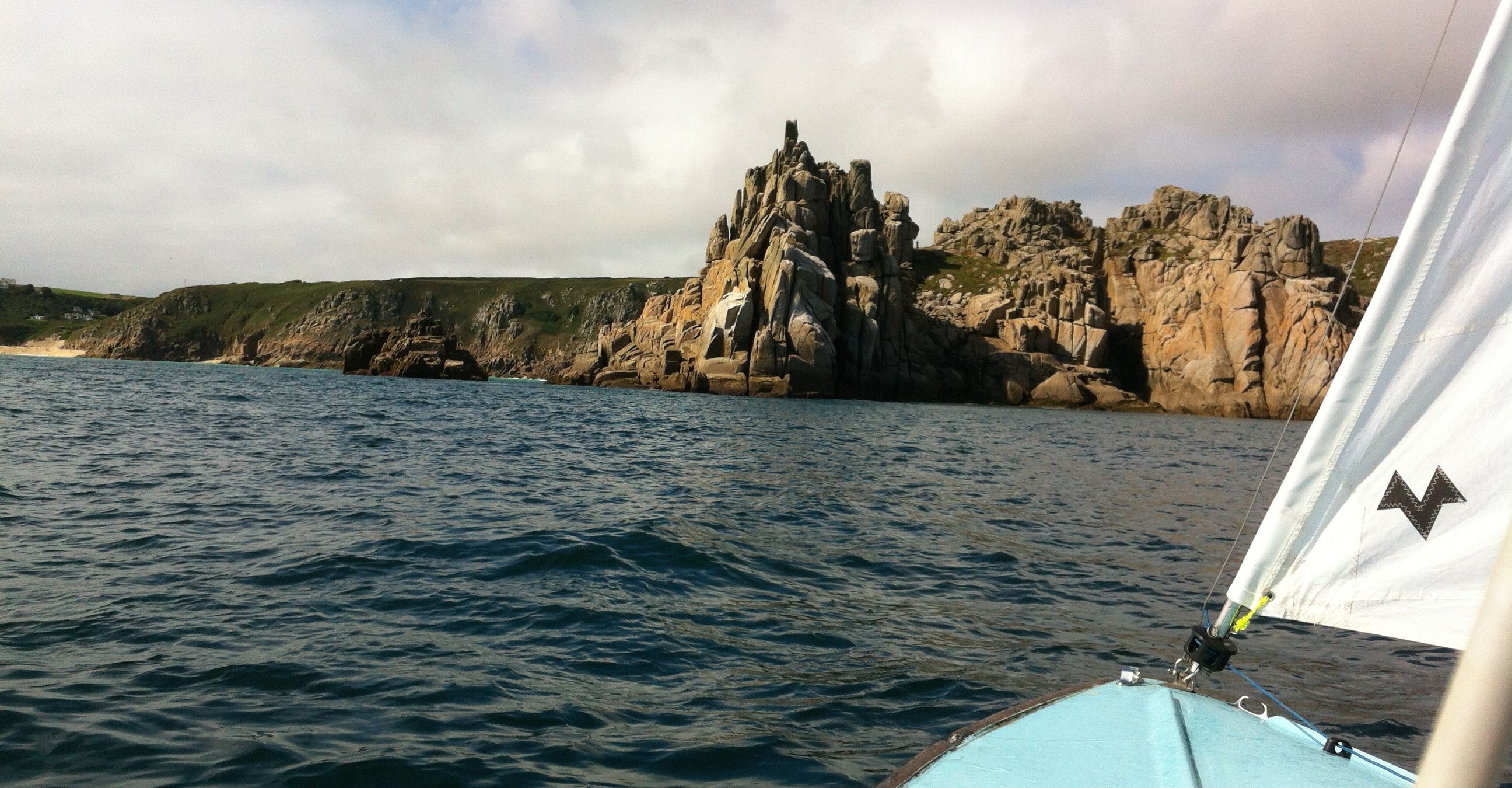 Lat day before Chemo.  Forget the feet and check the weather, wind and tides, and decide to sail for Porthcurno.  All goes well with rigging the boat and apart from forgetting to bring my thermos of tea I’m well stocked and well dressed for a day out in Marin-Marie.  The wind is north west and shifting south west later which should work well for this route, and I’m out over low tide and it should be almost high water when I get back to Penzance.

I have a great day – the granite cliffs are endlessly fascinating to me, and headlands and caves and Lamorna and Penberth and then a heavy low cloud rushes up and it start to spit and then rain.  I see it coming and put a reef in the mainsail and furl the jib 20% and put on my waterproofs as the squal comes in.  All is well, the reefing was quick with the new lines, and the boat handles the wind and pushed up swell fine and we keep tacking away.  Half an hour later it calms down and the sun fights through the mist.  Hot again already.  Then its Logans Rock and I pass close by to drink its majesty.

My favourite beach Pedny is in view and I swing into the bay to get closer – a few hardy nudistas tucked under the cliffs looking like Robinson Crusoes on a tropical island.  There’s a good surf running and I head in as far as I dare keeping a close eye on the waves coming in – that would be embarrasing to get capsized and washed up.  I sail on up past Green Bay which seems to have lost all its sand and past Porthcurno and the Minack Theatre up on the cliffs and I spy just beyond this a small cove and sandy beach I’ve never seen before.  It’s inaccesible from the land I’d say or I’d have found it before.  I pull in to have a close look.  I reckon a landing could be made by dinghy with a neap tide and room to camp there before the next high tide would take you off.  Its totally protected from the dominant westerly winds although this strong swell is pushing in there.  An interesting proposal and definitely worth trying sometime. 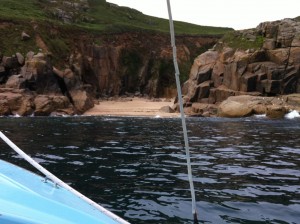 The sail back to Penzance must be about 10 miles.  I’ve got a tail wind and apart from a half hour lull where I have to get the oars out to keep moving in right direction the wind gently pushes me home, veering a little south as forecast as I rould Tater Du and gently jybeonto a line straight for Penzance.  The boats well balanced with the bungee holding the tiller and mainsheet needing just the occasional nudge from me, and I get out the handline, trawling for mackerel.  I keep three and throw at least 6 undersize ones back in.  There’s supper.  Thank you fish. 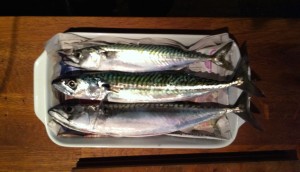 I have to tack into the harbour the wind now head on deflecting round the buildings and sea walls, but inside it drops away and for the first time I’m happy to sail up between the ranks of silent boats to my mooring, furling the job and dropping the sail as we go.  Sweet.  I’ve been out for 8 hours and a perfect sail.  I’m ready for tomorrow now.