I have visitors.  On Wednesday Gregory’s Girl’s people come to stay for two nights and I put them up in the part-furnished house. It’s a good exercise for me to straighten it out a bit for guests to use. They seemed to love the house and enjoy being there despite all the stairs.  Sue and Stephen are I guess in their 70’s now, and have owned GG for 20 years or so.  They bought her in the early 90’s with two other partners and kept her on the Helford, wintering in Gweek, so Cornwall is almost home territory for her.  Then, having bought-out the other partners, sailed her down Atlantic France, Spain and Portugal to Maderia and then the Canaries where she has been for the last 10 years.

It was good to meet them and to begin the process of understanding where they are at and where the boat is at.  We spent a relaxing day eating and chatting and travelling around Penwith taking in vistas and views.  It was actually quite hard to get down to talking about Gregory’s Girl, or at least the practicalities and so on, but there’s plenty of time.  This was more of a chance to get to know each other and where we all going.  They are happy to keep her on for a couple of more years I think, and that timing may all work out for me.  They’ve extended an invitation to visit them in the Canaries when next they go, and see the boat at closer quarters.  That seems a good idea and I’ve already been dreaming about some winter sun post-chemo R&R so that might all work out.  My suggestion to them was that we begin a process of evaluating the boat, creating detailed inventory like the yacht brokers do in order to eventually work out a value for her.  It would be an interesting exercise in any case, whatever boat comes my way in the end, and may be a help to them when they do decide to finally part with her.

Doing some deeper internet searching I’ve found another Tradewind 39 for sale, this time in Florida, so that’s number 7 of the 12 built.  I like the idea of tracking them all down for the sake of completeness.  Stephen thought that John Rock the boat’s designer and original maker was still alive so I might get in touch with him too.

And I found a bizarre footnote to one of the other Tradewind 39’s that I’ve already come across – confiscated in Peru as part of a £3m cocaine bust, but that’s another story.  The question is ‘What will happen to that boat when the authorities dispose of it?”  Hmmm.

Friday was my birthday – a nice quiet one with breakfast at the Dog & Rabbit; a treat with the papers and my iPad and Ali able to joint me for a cup of tea between the demands of the kitchen.  Then to the barn to do some more work on the panels and check out the old cellulose paint, stirring and straining it and rescuing 2 1/2 litres of it which I’ve re-tinned.  Should be good for another 25 years!  Brilliant.  Such a lovely smell too, but no doubt another candidate for early chemical poisoning if I needed one as a trigger for Lymphoma.  I don’t know – the doctors have not made any linkages with causes, but I know my past and can’t help wondering.

In the evening Jane L comes over and we get a take-away curry and watch Tarrentino’s ‘Django Unchained’ which is ludicrous but entertaining and a good end to the day.

Saturday is also sociable as Joff and Noelle have all the crew members who sailed with Holly Mae round the Atlantic over for food and rum cocktails.  A very happy and delicious evening, and I felt pretty good too and able to enjoy it all.  And it turns out that their daughter Annie Mae has a friend in Lima, so maybe that’s a way into finding out what’s happening to that boat…

I slept in the bus at the barn, and Sunday morning I met up with Robin who was in hiding for his 50th birthday, persuading him to meet me for Birthday Breakfast at the Dog and Rabbit.  So nice to catch up with him.  I first met him long ago in London, a friend of friends, who then much later turned up unexpectedly in Penzance.  I bumped into him working in the back room of a charity shop as a temporary job having done that end-of-the-line escape with no more than a back pack and found himself in Pz.  I remember now the mounting collection of interesing albums and books he was amassing in his flat from the charity shop!  Anyway, 10 years later he’s still here and doing his own thing with computers and animation, and all is well.

So late morning I get back to Pz and got on with some work in the house, touching up 1st floor window frames, and in the afternoon back to the barn to spray some of that old midnight blue cellulose paint on the Vitesse panels – they look good!

And a night in the bus over at Gloos with Ali and Milli and and a fine sunset supper of garden tomatoes, onion garlic olive oil and sardines on sourdough.  Exhausted but happy. 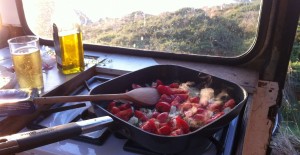