Well you have to really.  A week’s passed since the last chemo and I’ve been slow and numb and nauseous.  Thankful not to be having more of the nerve-damaging Vinblastin, but the damage is done and my legs feel wobbly and my fudgy fingers are clumsy.  The nurses ask me to fill in a health questionaire each time I’m in for chemo, and there are two questions that used to make me smile and wonder – something like ‘Do you have difficulty buttoning buttons?’ and ‘Do you have difficulty identifying small objects in your hands?’  I’ll have to check the wording, but now I know what they’re getting at.

I’ve been managing about 2 hours a day working on the house at 45A – the dry weather has allowed me to patch and paint up some of the windows that needed it, but all in all its held up well for 4 or 5 years.  Working out on the street has been sociable – people I know passing by, and quite a few strangers interested in the house for sale, and I showed two of them around.  Not for them though, just enjoying nosing about I guess.  That’s ok.  People like the house; how it looks and feels, and that’s encouraging.

There’s been a couple of nights out in the bus with Ali and Milli of course.  Hazy misty days and periods of hot sun, starry nights, and for a few days a beautiful good sized swell coming in from the far side of the Atlantic with a 16 second period and and offshore wind making excellent surfing conditions.  I watched it from a distance and would have enjoyed it but I haven’t got the energy to paddle out – I’ve barely got the energy to pad up stairs… That’s another Q on the questionaire.

One evening we had Cot to ourselves and parked down by the beach which had a lot of sand thrown up and the stream eroded a mini Grand Canyon in it. 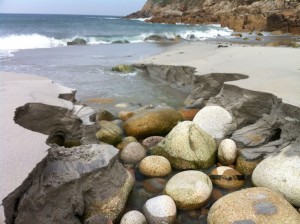 And the canyon spread by making holes:

I read the news today oh boy
Four thousand holes in Blackburn, Lancashire
And though the holes were rather small
They had to count them all
Now they know how many holes it takes to fill the Albert Hall
I’d love to turn you on

But it’s all good – the coundown is running and only one last shot a week tomorrow.

Mum and Dad visited yesterday, to see me of course and to check out a cottage they’re renting in November for a few days to celebrate Mum’s 80th.  I went with them – the place is fine and should be fun with a rare gathering of us four brothers.  And lunch at the Dog & Rabbit of course, but I felt rather out of it and exhausted and when they left later in the afternoon just felt like weeping.  I slept instead.

Today, Sunday,  I’ve picked up.  I took the boat out for the first time in two weeks and sailed in the breezy chop down to Mousehole and round the island and back – just great to be out in the air and sun, wetsuit on, happy to be getting a soaking.