It’s been days since writing anything and I can’t begin to catch up.  So some salients follow, written on different trains and going in different directions…

I’m on the train to London from Glasgow en route to Plymouth and tomorrow’s PET/CT scan.  The trip to Scotland has been wonder filled.  Sinking into it – that landscape, the skies, the inland seas and lochs, snow capped mountains and blue skies.  There’s nothing like it.  I feel restored and strong and ready for what comes now.

Ali and Milli have peeled off heading to Yorkshire, but we had a lovely couple of winter days, both needing it; the cold the warmth the strangeness of another land. 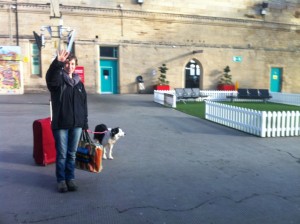 And I’ve found my boat. 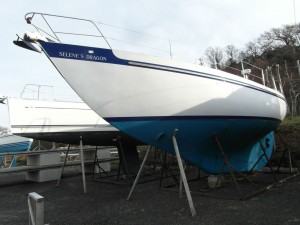 ‘Selene’s Dragon’ has patiently submitted to my crawling over her, flashing my torch and camera in dark corners and deep recesses, taking stock and measure, and apart from a short list of things to do, most of which will be resolved in the process of putting her back in the water in April, there is nothing to report. Except that she is a very fine boat in a high state of maintenance and repair thanks to the tireless efforts of Mike A who has done everything required to bring her up to standard for long distance blue water sailing.  This is a boat without limits other than my own.

The whole process has been a pleasure, and there is every sign that it will continue to be over the next couple of months as the process of marine survey and sale roll over and culminating with Mike sailing SD down to Penzance, a farewell to his beloved boat,  inviting me to join him for all or any leg of the route as my treatment allows.  So good to meet someone open, honest, passionate, generous and kind.  And a geologist too!  I’m humbled and delighted.

I use the time on the train to make list of observations and issues I’ve come across with the boat, for myself but also to send to Mike, and I guess to a marine surveyor to point him in the direction of what I’ve seen.

I visit Mum and Dad and have supper with them and Si who is there doing some wooding and logging.  And I sleep well but wake early as is my mode at the moment.  I pore over the photos of the boat, and slowly a new though dawns on me. And then another one.  I realise that some of the issues I’ve found with the boat are not isolated things but connected.  The truth is that in the limited time available all I could do was photograph everything in order to be able to return to it later, and that’s what I’ve been doing.  Two areas of concern develop in my mind, and I’m looking again at my photo record with renewed interest.  Back on another train I look into it more.

The first concern is that I don’t think the anode bonding is working properly.  The terminals of the sacrificial zinc anode found on the outside of the hull should be wired to other metal elements on the boat, particularly to those that are bathed in sea water, so the prop shaft and propeller.  On SD the terminals are rusted and from my photos the bonding wire only runs to the engine block, and I’ve got concerns about electro-chemical corrosion. The zinc anode is used to limit the tendency of different metals in water to act as charged poles in a electric cell and can cause the corrosion and destruction of the positively charged less ‘noble’ metal. And the corrosion I’m seeing on both the prop and the shaft connecting flange is related to this I think.  Not so good.  The concern runs deeper than the rust or pitting that can be seen on the surface.  This electrolytic corrosion can affect hidden bushes and bearings too.  And then here is the surface rusting of the engine mounts both sides of their rubber bushes, and the heavy corrosion of the gearbox operating lever swivel join.  Hmmm…should I start worrying?

And the trouble with this line of thinking is that it soon gets out of control.   Mike A had been totally up front about the problems he knows the boat still has – his list of ‘ warts’. But I think what I’m seeing are some things he doesn’t know about.  It’s a tall order to keep such a boat in fine fettle, and he’s spent a lot of time and money doing good works to more urgent structural things like keel bolts (more on those later) and upgrading the electronics so that the boat is very sailable.  Lots of questions form in my mind but there’s no easy answer with the boat 600 miles away.

And now some observations about the keel bolts.  Mike has spent a lot of time and money having the keel bolts replaced with stainless steel.  A huge job and many many thousands of pounds.  But what I’m seeing in the bilges under the saloon floor is pooled heavily rusted water that can only have come into the boat past the keel bolts.  And looking closer it’s clear it’s not just one bolt but several.  And there’s wet rust streaking down the outside of the keel from the keel joint, draining back out of the bilges once the boat was taken out of the water.   I don’t think Mike knew anything about this – he will have had the boat taken out of the water in the autumn of last year by the marina staff in his absence and has not been back since.  There wasn’t enough water coming to sink the boat and any case the bilge pump would have removed some of it.  There would have been no cause for him to lift the cabin sole plates.

I don’t know how big this problem is.  There’s sea water coming into the boat up some of the new keep bolts.  Stainless steel can corrode very quickly in stagnant sea water, deprived of oxygen, and that is now the situation with some if not all of the new keel bolts.  If they are kept dry then they can last 50 years, if they sit in trapped seawater they might only last 5.  All I really know is that this shouldn’t be happening three years after the job was completed.  And it can’t be left as it is.  I’ll be suspicious of a quick fix too – the advice I’ve come across suggests that it should be the main keel/hull seam that keeps out the water, not a little mastic under the nuts and pressure plates.  In fact, the advice for a proper job is not to use sealant under the pressure plates so that if sea water does compromise the main keel seam then you get some warning about it before the invisible studs or bolts rot away! HMMMM!

I don’t know.  I’m going to need some good advice on this.  But first I will have to send my list of observations to Mike.  I’m sad about it.  This will be upsetting for him I imagine.  I also imagine he will want to sort out the problems because that’s his nature. 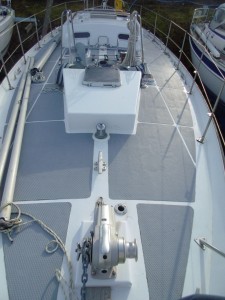 Selene’s Dragon remains a fine boat and I’m very keen.  But suddenly cautious too.  There’s more thinking to be done, and I hope things will resolve for everyone.  I remain very positive about it.  Lots to learn.