Day 365 the full year passed without comment in the end – it was my first day in London and I was of course too busy to notice.

Weeks have passed again and I’ve not been writing.  Well, why not?  I’m not sure, a combination of things; bored of my own voice is at the top of the list I guess, and also a growing tension as the days tick by and the next round looms.  I’m not looking forward to it.

Anyway, what have I been doing?

Well, London for a week with visits to Kings College Hospital; meetings with doctors and organisers and tests.  Chest X-ray, bloods, ECG and a lung function test. The latter I was concerned about because I feel often out of breath and my lungs seem to ache at times but I passed fine, better than a year ago at diagnosis, so hey, not so bad.  And I’m pronounced fit for the next round.

We set some firmer dates for what’s coming:

3rd April – a chemo shot of Cyclophosphamide which will stress my bone marrow and make it over-produce stem cells, pushing them out into my blood stream.  This is going to happen at Treliske which is helpful as it reduces the need to travel to London at Easter.  Funny how my treatment dates fall on Bank Holidays, with the last round of chemo beginning on New Years Eve.  A special case…

10th April – back in London for a sort of inauguration day at Kings where the next group of transplants get an introduction and tour of the unit.  This is a good thing as its going to be home for perhaps a month.

13th April – Stem Cell Harvesting also at Kings – a day or maybe two in hospital hooked up to a centrifuge machine which spins the stem cells out of my blood, to be then frozen and stored until the transplant itself.

15th April – back to Penzance for a couple of weeks

29th April – Admission as an in-patient to Kings for the massive dose of chemo drugs designed to zap the cancer, followed by the transplant of my harvested cells which then re-colonise my chemo-damaged bone marrow and kick start my immune system again.

Last week of May – some four weeks later or when my blood counts and immune system are back up, I come back home.

London was good – always so busy and so much traveling around, but from Denise’s relaxing house in Kew the overground trains link up the whole city in a big looping circle above ground and I suddenly see the sense of Clapham Junction with its 15 platforms.

Outside of the hospital visits there’s time to catch up with friends: an excellent vegan lunch at Cafe Maloko in Camberwell with Virginia who tells me about a mindfulness program being run at Kings which would be interesting to tap into during my stay if possible; 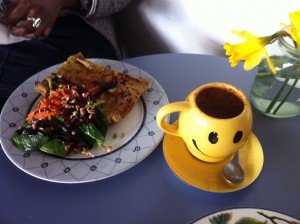 and a supper on Thursday with Fi and Roman and Susanna and plans in the making for bringing food in to the hospital for me, Fi casually cooking steak whilst talking to us and paying full attention to little Caitlin all at once; and a visit to Ffi’s new studio near the Barbican and a walk through the sunny streets to a lunch at St Johns with Roman with a wonderful salad of whole beetroot, spinach and soft boiled egg, and some roast marrow bone too – it’s got to be good for you! 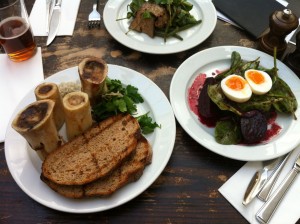 And a chat with Fergus Henderson about bubbling bones and maybe we’ll talk more over a broth next time, and then more city walking down to Borough Market where the day before I’d met Denise to look at her new appartment and where we had a magnificent Vietnamese pho broth 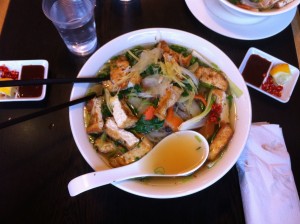 and then walking back along the river and finally meeting up with Iain at the Mayday Rooms on Fleet Street.

And, apart from my gastronomic tour of the city, what else?  Yes, some Tai Chi!  Two one-to-one lessons from Gingi Lee at The Shala yoga and pilates centre; a great teacher and inspiring, so I learn the Qigong 8 Brocades and then the first positions of the Yang Tia Chi series in his big airy open yoga studio – I enjoy it despite the numbness in my feet which makes balance difficult, but I feel that that is one of reasons for doing it, to push me to challenge that.  So, a new thing to play with – and it feels right.  Gingi explains the connectedness of everything; earth, energy, body, spirit and life, and I in turn explain why I think tai Chi can help me deal with my cancer which is the result of everything too somehow and which I am having to accept and yet wish to change on a cellular and interplanetary level.  I too understand the interconnectedness of everything.  I’m not sure what I said now but Gingi seemed to understand.

I can’t possibly recount all that’s happened in the last period.  But I’m back in Penzance and yesterday had a very special day – it was bright and fresh and I could see that over to the south west the peninsula was clear of cloud and there was a sharp cold northerly wind which meant that Pedny beach would be both sheltered and sunny so I took broth and rice in a flask, and some tea in another, and a blanket and got down to my favourite place; my cove, that sand, those cliffs, those colours, that sea, and I practiced my 8 Brocades in the sun and the air and what a joy that was

And I was able to repeat that again last Tuesday, but this time the wind was more westerly and very strong pushing up a big thundering swell and at high tide there was no beach to stretch out on but I found a flat area half way down the cliffs and tried out my brocades again and then slept after lunch warm against a granite boulder nestled in long soft grass and heather. 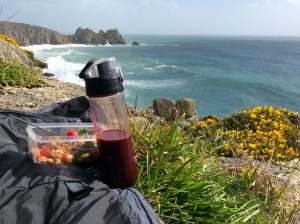 And what else? Well, jumping ahead again it’s now the evening of Thursday 2nd April and I’m in the Lowen Haematology Ward at Treliske – I’m here for the night as they want to begin tomorrow’s Cyclophosphamide chemo at 5am as it’s a 16 hours hook up.  So I’m in that weird world of hospital hygiene and soft greens and blues and purples and bleeps going off all around me as the evening shift nurses struggle to keep up with demands.  I’m missed out for supper somehow but am offered a sandwich.  Happily I’ve come prepared with supplies – a bean soup in a thermos and hummus and flax seed crackers and lots of fruit and a litre of fresh carrot and beetroot juice zinging with ginger.

And I’ve got my laptop which I’m writing on now and its picking up the guest internet ok so that’s me for the next 30 hours.  The chemo drug is heavy and that’s why I’m here for so long as I’m to be thoroughly irrigate with saline each side of the chemo itself to ease the drug into me.

I feel dog-tired.  It’s 8pm but my eyes are drooping and I could just pass out.  But I’ll try to keep awake for a bit longer – its going to be a long night.  And why doesn’t someone stop that bleeping alarm! Its been going for an hour.  No earplugs will block that out.  What do I do?  Go round the screen and ask what’s going on? Does no one else notice?  Is everyone just so zoned out that they can’t hear it any more?  I feel sluggish and heavy.  Bang.  Reality check – I’m in here for cancer treatment and I’m surrounded by some very sick people.  Am I one of them?  I think about the texts of Jon Kabat-Zin that I’ve been reading – mindfulness – ‘This is it.’  ‘Are you Awake?’  ‘Wherever you go, there you are.’  I didn’t bring that book but instead have Donna Farhi’s ‘The Breathing Book’ to dig into – it’s a parallel track, a parallel tract even.  I can loose myself in the breath. Suddenly its quiet and the bleeping has stopped and the voices have stopped, except murmuring out in the corridor.  I can hear the click clickety click of someone’s chemical pump running.  It very bright in here – strong neon to sleep under.

But good things have been happening too.  Today the sale of my Chapel Street house went through to completion and so I’m in funds.  All done with the mortgage paid off and some money left over.  It’s a strange exchange, numbers on a screen for a pile of bricks and dust, wood and paint, but I’m happy.  It’s one big thing less to think about.  And the bank owned almost two thirds of the that house and the whole project went well with the re-arrangement of boundaries and both the house and my studio now being whole and happier places I think.

And funds for the boat of course.  I’m pleased to say Selene’s Dragon is still on track.  There were a few days of it looking like it was off – the goal posts moved and the ball punctured – but it’s all come right again and owner Mike will recommission the boat and sail her down to Penzance as agreed, sorting out the structural and safety issues highlighted by the surveyor’s report.  So yesterday, in the light of the imminent house sale I wrote a letter to Neil the Penzance harbour master explaining that I needed to let go of the drying mooring he’s been kindly holding for me and request a berth in the Wet Dock for a deep keeled yacht.  In the end I hand delivered my note and as he was in the office I explained the situation in person as I gave him the letter.  No problem.  No Problem!  Brilliant news.  SD can come to Penzance and there’s a berth for her in the Wet Dock, just a few minutes walk from home.  How good is that?  It can all happen.  Thank you Neil, thank you Mike.

That’s it – more or less up to date.  I haven’t mentioned all the great work Si’s been doing to my bus on and off over the last few weeks and I help a bit last Sunday to push it on and so now the bus is back on the road with new radiator and front crank oil seal, fresh engine oil and antifreeze and a new main fuse box.  Ready for summer again.  And today he rescued me again, getting my motorbike to start after I failed with it this morning, draining stale fuel from the carburettors… I’d be immobile without him.  Thank you Simon. 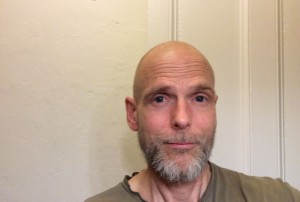