Well, the Plerixafor did the job – it made me pretty rotten for the evening but I woke in Denise’s lovely house at 6am and felt ok, got up, made a big salad for lunch and set off in good time for Kings, arriving half an hour early this time with the sun coming up so I went in to the Ruskin Park beside the hospital for some peace and air.  There’s a wild bit with long grass and mud paths and trees and very few people about so I tried out some Tai Chi for 20 minutes, repeating my 7 moves over again and listened to the birds and watched the squirrels darting about.  Calming.

In the Apheresis ward they were ready for me with gentle jokes about my passing out again.  As a precaution I had been given some local anaesthetic cream and strange cling-film patches to cover it with which I had applied to my arms before I set off.  This helped I’m sure, but actually it was going to be alright today; I was ready and relaxed.

There were 5 chair/beds in the ward, each with a patient, but we hardly acknowledged each other.  One guy wore mirrored sun glasses all the time and put the chair back full tilt and slept for most of his session; smart move maybe but rather alienating the mirrors, but perhaps nice to take the neon glare off.  Anyway, after my bloods were taken my nurse started to plug me in to the centrifuge machine and made all the preparations.  They were confident that the bloods would come back good and so had decided to proceed whatever the stem cell count. 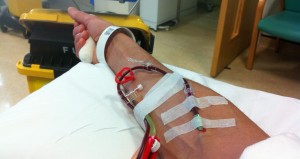 It’s a painless procedure, hooked up for 5 or 6 hours while the stem cells and some plasma are separated out as my blood circulates through the machine and back into me.  It looks to be going well.  Mid-morning we get the stem cell count: yesterday I scored 8.6 but today… I’m up to 51.0!  Smiles all round – that’s a high score.  I’m quietly elated.  By the end of the procedure, about 2pm, there’s a bag of stem cells hanging there.  They’ll be packed off, prepared and frozen now, once a sample has been taken to check the final count.  And I can go – all done.

I call the ward later in the afternoon – a harvest of 5.6 million stem cells.  That’s a good result.  The minimum requirement to proceed with transplant is 2 million, and 4 million would very good.  5.6 is excellent.

I decide to head back to Penzance this evening, catching the 18.05 using Pat B’s generous gift of a first class ticket to travel in comfort at the height of rush-hour – such a kind thought!  A life-saver in fact as I feel drained, aching to get home.

I spend a lot of the journey in a daydream really.  Lucy H has read my description of sailing to nowhere, and sent me an extract from Lewis Carroll’s ‘The Hunting of the Snark’:

He had bought a large map representing the sea,
Without the least vestige of land:
And the crew were much pleased when they found it to be
A map they could all understand.

“What’s the good of Mercator’s North Poles and Equators,
Tropics, Zones, and Meridian Lines?”
So the Bellman would cry: and the crew would reply
“They are merely conventional signs!

“Other maps are such shapes, with their islands and capes!
But we’ve got our brave Captain to thank
(So the crew would protest) “that he’s bought us the best—
A perfect and absolute blank!” 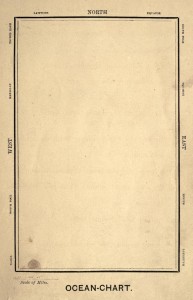 Yes, that’s exactly where I want to go!

And it’s far fetched but I find myself listening to The Gorillaz track ‘Feel Good Inc.’ over again with its floating windmill island leaving all the madness behind, and crazed De La Soul rap towards the end