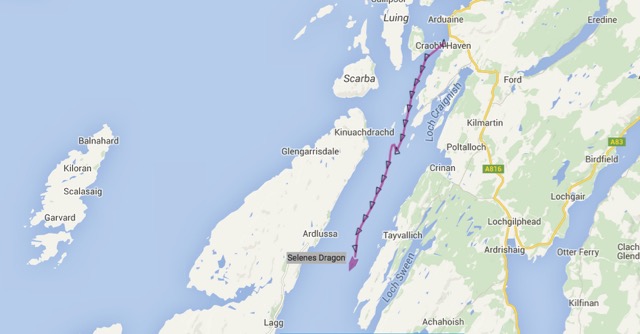 That’s a healthy step up.  I like the look of that.  We are aiming for 2.20/L at which point I stop being neutropenic…

Today’s been good – the routine much as yesteday; Bloods and pills and jabs and Obs and drips and Nebs and, well, I’m being well looked after and kept busy.  And there are positive changes too, so I can drink without a straw, and I ate a ham&cheese toasted sandwich for supper with some of the organic cucumber that Candy had brought over.  I also did my 8 Brocades and some Tai Chi which I managed to fit around the L of corridor round my bed (I know that space so well!)  That was a very pleasant surprise and a joy.  I’m moving again and on my feet.

Then finally some news too on Selene’s Dragon after a few days of radio silence from the yacht agents and the owner Mike A.   Things are moving fast and the broker’s have rather lost touch with him themselves it seems but they sent me a link to the Marine Traffic website that shows the whereabouts and routes of vessels carrying AIS (an Automatic Identification System) and plots their courses.  And there she is!  Sailing down the Sound of Jura at 7 knots and a top recorded speed of 10 knots!  That’s good going for a heavy boat, and Mike must be enjoying himself.  The brisk northerlies we’re having continue for tomorrow and into Wednesday so he’s more or less on a dead run, but the wind goes west which might make getting round Land’s End a little challenging later in the week.  I can see now why he’s been making such haste!

The only thing is that the AIS track stops at 1.15pm yesterday, so there’s no new update.  I wonder where he’s got to now?

Meanwhile in Penzance, Joff R. and John M. and Paul S. are very kindly on call as a welcoming committee for SD when she comes in.  Mike’s estimated arrival was the 28th or 29th.

I could get over excited!

Its now bedtime but I’ve just managed three circuits of Foot Dominoes which felt good and stronger than yesterday, and I managed to do one circuit backwards – it is possible but it is harder.

And top marks go to Susanna H. who emailed to say that she’s tried Foot Dominoes in her studio and her steps go like this:

Ok, Susanna, your room’s too big but your suggestion of stepping round groups of furniture in the space away from the walls would work very well.  You’re thinking and walking outside of the box.  10/10.