A breakthrough day today.  I suddenly felt able to actually do something rather than think about doing something.

The last week or so has had a pretty regular pattern: moving slowly in the mornings, enjoying the sunshine, maybe some Tai Chi in the garden, maybe some plant tending, maybe some reading, maybe some food making and increasing amounts of eating as I begin to feel better.  I’m sometimes really really hungry!  I began to get glimmers of taste of things and think I’m probably at 20 – 30% of full flavour appreciation.  That might not sound too good but actually to get a hint of cool cucumber or a sense of fruit sweetness is marvellous after being in the desert.

My lungs are improving – the horrid cough is retreating and I just hack a few times a day now.  My lungs feels tired and maybe that’s not surprising but this morning as well as feeling energised I also could feel a dull weight in my chest which of course put me in a bit of a spin because I’ve felt that on and off over the last year and it’s not always been good news.  There’s no point in speculating though really – I have a scan in two months time and that will show me where I’m at.  In the meantime life is full and rich and I’m excited and awake to it.

I’ve been spending a good amount of time on the boat of course.  And until today this has mostly been just looking at things and sorting out all the lockers and the contents of draws and boxes of spares and screws and fittings and electrical items.  It’s all done and I know what I’ve got.  I also took all the spare sails off the boat and took them over to Alison’s to spread them out and measure them and check them over – some crisp and un-used and some tired but serviceable – lots to play with…

Today was different though as I say because I actually did manage to do some work.

The marine electrician came to the boat to assess how to fit the anode bonding to the propshaft on the boat.  Access is difficult which is probably why this job has not been done.  So we looked at it and discussed options but whichever bonding solution we choose we have to have better access down behind the engine.  It’s very tight.  There are two large cockpit drain pipes running to big sea-cocks – if we could remove those pipes then we could reach in behind the engine.  But the sea-cocks are hard to operate.  They’ve had new handles made up and fitted but they are too long and snag on some untidy wiring loom on the port side.  In fact it’s impossible to close that sea cock and its partly seized up.  Not helpful and not safe.  So after the electrician has gone I decide to tackle this and spend a very happy day on my knees getting oily.  By the end of it the wiring loom has been tidied up and secured safely out of the way, various bilge pump and engine breather and cooling pipes have been re-aligned, the two sea-cock handles have been removed, cut down and rounded off to make them comfortable for the hand and then the seacock mechanism on the port side worked back and forth repeatedly to free it off.  The area around the engine and the sump underneath have been pumped out of spilled coolant from when the yard in Scotland recomissioned the engine, and I unblocked the pipe to the heat exchanger expansion bottle, cleaned that out as well and topped it up.  Finally I took the stern gland greaser apart – it was filled with an odd mix of almost solid old white grease and runny oil so I cleaned that out and then went over to see Graham at Penwith Marine Services on the other side of the Wet Dock and picked up a big tub of medium waterproof grease, re-packed the greaser and pumped fresh grease into the stern gland which happily and gratefully stopped dripping. 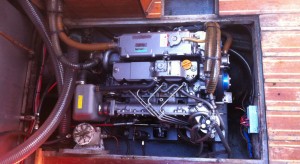 As for sailing, well it will come in good time.  In truth I’m still very weak and easily tired.  I’m also very pleased to be getting to grips with how this boat works, and until I’ve got a good picture of that wouldn’t want to venture very far anyway.  For those of you who have been reading this blog from the beginning you’ll recognise a trait here – I’m just the same with the bus and do most of my travelling in my mind!