What I ended up doing diet and nutrition-wise is anecdotally laid out in my blog – I put a lot of effort into changing and improving and enjoying what I ate.  The simple food combining approach of avoiding having protien and carbs on the same plate, make vegetables at least two thirds of any plate, add variety, think Rainbow Diet, cut out sugar (including honey and restricting sweet and dried fruits), cut out processed foods, reduce dairy, cut out refined flours, and instead enjoy rich and delicious bone broths, the green smoothies, the juices, the salads and super-healthy mueslis… 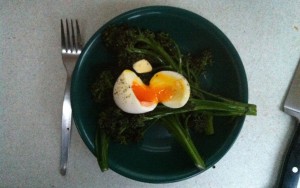 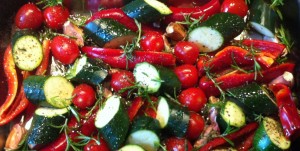 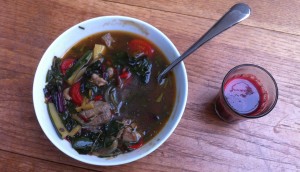 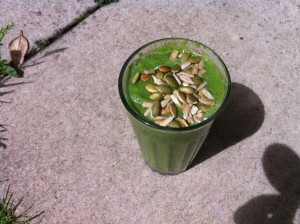 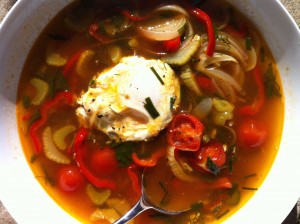 My short-cut advice to people asking about an approach to an anti-cancer/supportive diet is to find a cancer-care nutritionist outside of the NHS to help you devise a programme to suit your needs.  Everyone is different, every cancer is different.  Don’t spend too much time online – it’s a minefield of information and can be very confusing and depressing.

The nutritionist I found had a lot of good experience in supportive cancer-care and that was what I needed.  You can find Liz Butler’s website Body Soul Nutrition here.

Consulting a nutritionist costs money, but it was money well spent, and excellent to have a plan to work from and a person to work with when questions arose or as my hospital treatment evolved.

In the early days of diagnosis and treatment I spent a lot of time online looking for information about diet and nutrition and found an overwhelming amount of information.  Diets to support orthodox treatment and diets as alternatives to orthodox treatment.  For a while I agonised about alternative treatments to chemotherapy, but not for very long.  Frightened and very ill I decided to go down the orthodox line and began chemotherapy as soon as possible.   I didn’t believe that with my late Stage 4 diagnosis I had the time to experiment.

I don’t believe there are any single natural substances out there that will act as a silver bullet though you’ll find plenty of claims for that online.  But could a fine-tuned diet and nutrition/supplement program, given enough time and the right support and perhaps the right cancer, lead to the control and eradication of that cancer?  I think it could.

I became aware of the Gerson Therapy and a modified UK version of that called Plaskett Therapy which both seem to offer the possibility of putting cancer in to remission through a super-rigorous dietary, detox and supplements program.  But it’s not legal for nutritionists to offer alternative cancer cures in the UK – the Gerson centres are located overseas and the Plaskett program ran for a year or two in the UK but was shut down and Dr Lawrence Plaskett is no longer practicing.    There’s plenty of information available online about the daunting and very expensive Gerson Therapy.  Plaskett Therapy is more obscure although there is a book out there that attempts to explain the philosophy behind the program.

Unfortunately Plaskett’s self published book appears written under stress and anger and the content of the book is confusing and of course inconclusive.   It’s a shame, because I think he was/is onto something, and it does appear that a significant number of cancer patients that he and his team worked with achieved some level of remission through adhering to his program.  It’s important to remember that these were cancer sufferers who had fallen through all orthodox treatments and were simply being offered NHS palliative care – basket cases in effect.  However, there’s no follow-up information available on how successful the remissions might have been.  It’s frustrating.

What do I think of the Gerson and Plaskett Therapies?  They are tough to contemplate undertaking and would be extremely difficult to stick to.  I didn’t like the underlying sense that failure to respond to the therapies was frequently put down to the failure of the patient to adhere to the strict programs rather than admit that some cancers will just not respond to any form of treatment.  I researched these therapies after the immediate return of my lymphoma following the first round of chemo, and as I faced up to the prospect of high dose treatment and stem cell transplant I also faced the prospect of that treatment not working either and then what would I do?  Would I just accept palliative care and wind down to die?

What I did in the end was find a cancer-care nutritionist, Liz Butler, who I believed could help me formulate a manageable and sensible approach to diet and nutrition that would firstly support me though treatment I was undergoing, and who seemed to have knowledge about the principles of the Gerson and Plaskett Therapies and would be there for me if my cancer failed to respond to the high dose chemo and stem cell transplant (STC) procedure I was embarking upon.  It was to be a phased approach – get started now, get focused and get ready. Support myself through the conditioning chemo and through the upcoming STC treatment.  Then if I failed to respond to that final round of orthodox treatment I had a choice; if I had the desire and energy I had an option to work with Liz on a version of Plaskett.  As it is I haven’t needed to pursue that option.  My cancer appears to have retreated and I’m in remission.

I would say that the advice I received from Liz Butler, the comprehensive supplement programme and my attempts to focus and fine-tune my diet really helped me take the treatment and have helped me recover from that ordeal.

I would recommend anyone going through this to find an experienced cancer care nutritionist, and I would suggest doing it as soon as possible because I wasted a lot of time and energy trying to fathom out an approach myself.  Yes, it costs money.  The price of the consultations are clear on the website and I think I’ve spent about £1500 on the recommended supplements over a year.  Here’s a link to Liz Butler’s website, Body Soul Nutrition.

I’m still eating pretty well though have to admit I’ve relaxed a bit – eating bread and I have to admit to having an inexplicable craving for 85%plus dark chocolate!

Some background to my approach to diet:

Before working with nutritionist Liz Butler, back in January 1014 and before my diagnosis, I’d already started a detox diet.  This was my own response to the eczema that had broken out in December, and to my feeling of general unwellness.  The basis for the detox I followed is a book by Belinda Grant called ‘The DETOX diet book’, published in the early 1990’s.  It’s unglamorous and there are no lovely photos of plates of healthy food, but I like its straight forward approach “This detox programme was devised by developing the simplest, most straightforward naturopathic principle – that your body has its own innate vitality and its own drive for optimum health.”

The book was lent to my by writer, poet and musician Richard Dyer who at the time would do a one-month detox each year to clean out the system.  I needed it because I’d poisoned myself making sculptures out of industrial quantities of soap, and had had a sort of toxic shock which manifested itself as an eczema rash.  I stuck with the diet for 2 months and the eczema rapidly disappeared.  And another thing happened too, which is that I felt great -lots more energy and clarity of mind!

Grant’s detox diet is essentially macrobiotic I’d say.  Based heavily on short grain brown rice, vegetables (raw and steamed), salad, fruit, nuts and seeds, sprouts, goats yogurt and cheese, lemon water, olive and seed oils.  Her diet is programmed for a month and given the amount of raw vegetables she suggests I’d recommend only doing in the Spring.  My modifications to the diet in the colder months simply involved eating more lightly steamed vegetables.

This time round though, because of the weight loss I’d been suffering, I decided to keep fish and chicken in the diet on a regular basis.  Grant’s diet allowed for these as transition foods in and out of the main diet programme.

In some ways it’s easier to list the exclusions:

NO alcohol, NO caffiene, NO sugar, NO red meat, NO refined wheat, NO cows milk products

So that’s the basis of what I’d been eating.  I think this has been good for me, and a good basis to fight the cancer and to cope with the chemicals.

However, I’m going to qualify this approach a bit.  The main thing for me now, undergoing chemotherapy, it to EAT! And eat a lot if I can.  The chemicals make you nauseous, your mouth tastes like battery acid much of the time, you can’t taste food or its tastes bad or weird.  Eating isn’t always easy, but you have to eat.  Given this, I am going to eat what I like, and I’m not going to chastise myself if I do eat the odd piece of white toast with marmalade, or have cooked meat or whatever.